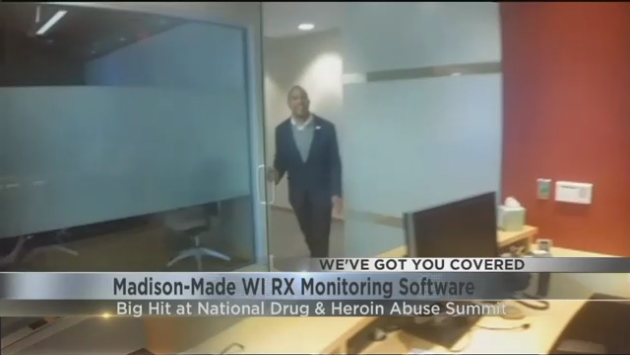 It's easy to get way too esoteric when we're talking about how important it is for an organization to understand its data. Yes, trustworthy data is critical for our customers to meet needs like serving customers, managing risk, predicting costs, and analyzing markets.

But nothing is quite as powerful as being able to say:

We're very proud that we can say that now too, as MIOsoft is the data quality solution for a new state program in Wisconsin that's built to save lives. Wisconsin's enhanced Prescription Drug Monitoring Program (ePDMP) utilizes our software, and was recently featured at the 6th annual National Rx Drug Abuse & Heroin Summit in Atlanta, GA.

Check out this video of coverage from Madison’s Channel 27, as they reported on MIOsoft’s role in this important innovation:

This year, more than 2,000 people attended the National Rx Drug Abuse & Heroin Summit. Originally founded in 2012, this conference provides a place for people invested in the fight against prescription drug and heroin abuse to come together and discuss solutions.

Prescription Drug Monitoring Programs, aka PDMPs, are a major part of US efforts to address prescription drug abuse. 49 of the states, plus DC and Guam, have some version of a PDMP.

Yet only Wisconsin and California were featured in the summit session "Innovations: California's Clinically Assistive PDMP Features and Wisconsin's Reimagined PDMP Role."

A PDMP is a statewide clearinghouse of information about controlled substance prescriptions and dispensings (dispensing as in: the event when a drug is dispensed from a pharmacy or doctor to a patient, after a prescription).

Having clean and reliable data is a challenge for any system. But for PDMPs, the consequences of bad data can have literally tragic consequences. That's where we at MIOsoft come in to help our state.

As an example, consider the importance of patient matching. Records of prescriptions and dispensings come in individually, each associated with a specific person. Of course, a person can have more than one prescription and dispensing.

A person can also have more than one variation on their name. Think Eliza Hamilton vs Elizabeth Hamilton. And then there's typos and misspellings: Eliza Hamiltin.

But you can't have doctors scrolling through the records for every person with a name similar to their patient's name, trying to figure out which ones are really their patient. On the other hand, if you're very strict and never match Eliza with Elizabeth, you're not going to get a person's complete prescription history, which defeats the whole point of having the PDMP.

MIOvantage can automatically handle situations like this—and more complex ones, by using a relatively small number of rules to address thousands of potential scenarios. This means MIOvantage can do truly effective patient matching for Wisconsin's ePDMP, even when the data is highly flawed.

At MIOsoft, we were really excited to see the state's initial RFP for data quality in the ePDMP, as they set out with the ambition to make the best PDMP software in the world.

With MIOvantage's machine learning technology, we have become a critical component of the ePDMP and are contributing to the state's lofty goal.

MIOsoft helps many organizations reach better outcomes with more informed decisions, but rarely is there such a clear way to be able to save lives using data quality.

We're excited to build on this success and pursue partnerships that might help bring similar innovation as Wisconsin's ePDMP to other PDMPs throughout the country.

If more states will explore how cutting-edge technology can help them combat prescription drug abuse, we might be able to fundamentally revolutionize the US's approach to fighting this growing epidemic.