Jordan Barrette and I have been in Chicago this week for the inaugural Microsoft Ignite conference. If I had to pick one word to summarize the experience at Ignite, it would be GIANT.

Monday’s opening keynote was a morning-long mega-show. Being Microsoft means you can have Common kick off your event with a spoken word performance meant to inspire all 23,000 people you’ve collected in one cavernous room. Providing a good view for all those people means casting the stage to a lot of very large screens. 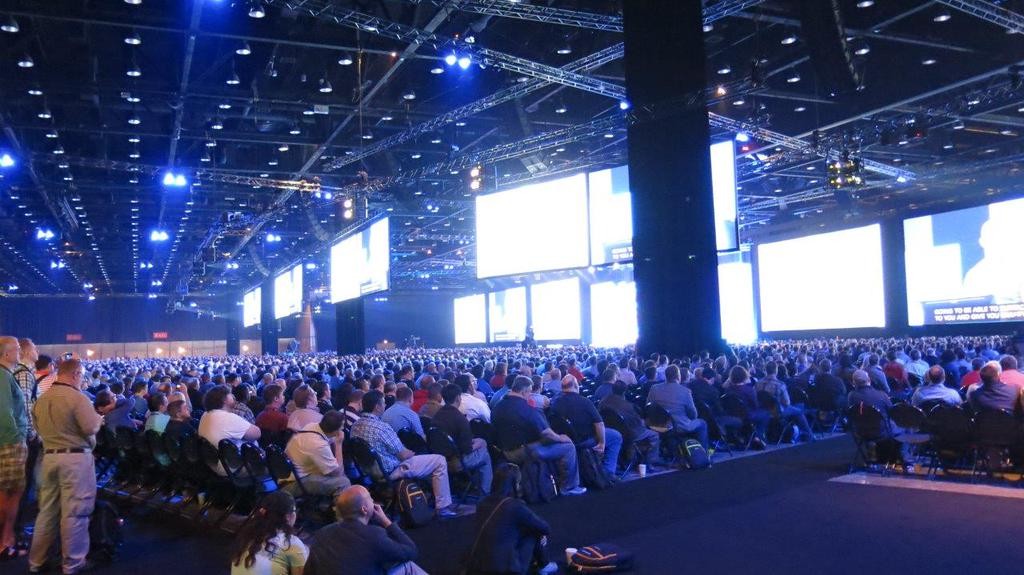 It may also mean finding some extra seating.

To pull off a giant event, you need a special facility. It’s a good thing McCormick Place is the biggest convention center in North America. In fact, it was able to concurrently host Ignite and the Internet and Television Expo (INTX) with plenty of room to spare. McCormick Place hosts so many people that Chicago decided to build a special underground bus corridor, the Busway, to connect it more directly to offsite hotels.

Of course, giant events have to have a giant Expo Hall filled with an endless expanse of vendors with giant booths. Some vendors pass out smiley-face buttons or moleskin notebooks, but at a giant event, there are also magicians and motorcycle raffles luring potential customers to booths.

An event that brings tens of thousands of IT professionals to one place pretty much has to offer a ton of useful content. The official MyIgnite app lists 1145 sessions delivered by 1088 different people. Many of the sessions cover how to use or deploy specific Microsoft products, but the big vision sessions are what we came to see.

What is the vision we’re taking away from this week? From the keynote on, there has been a consistent message: “embrace data”.

The message comes through whether Microsoft is talking about their collaboration tools, their user interfaces, or their Azure cloud environment.

And they discussed how the latest SQL server will let you move cold rows from on-premise to Azure, in a way “scaling” your table to the cloud.

On the conference floor, there is a critical mass of cloud solutions providers showing off their value-added services for Azure.

In the sessions, the breadth and depth of Azure is shown off and explored, including lots of sneak peeks at upcoming features.

And all that support for Azure is good news for us at MIOsoft, since we are a Microsoft partner and are increasingly using or supporting Azure in our projects, products, and services.

Along with the noteworthy effort to make the Windows 10 experience a seamless one for consumers, it’s evident Satya Nadella has focused Microsoft’s attention on reestablishing itself as the most compelling choice for Enterprise IT. Based on the scene here in Chicago, they appear to be on the right track.

Follow us (@jherritz and @jordanbarrette) to see additional thoughts and updates from Microsoft Ignite.