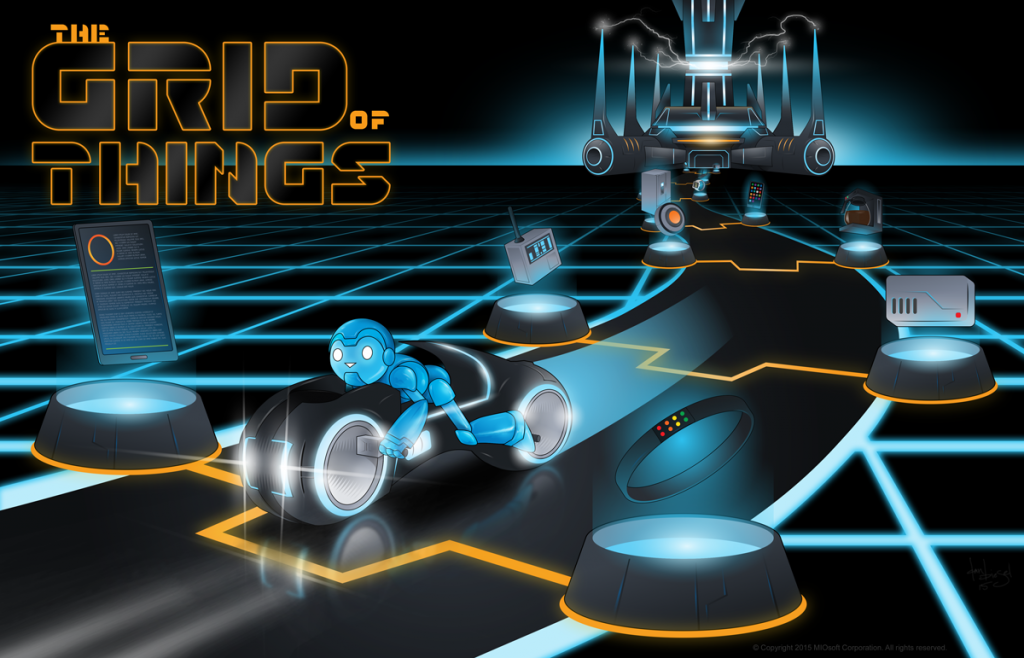 5 lessons the Internet of Things should learn from the Grid

The Internet of Things has been defined in many different ways, and it’s been labeled a marketing buzzword probably just as often as it’s been hailed as revolutionary.

But I believe the Internet of Things can be revolutionary. That sentiment is mostly inspired by similarities between IoT and the Grid.

Even if you don’t read anything else in this post, you should at least read the following quote. Then tell me that the original vision for the Grid doesn’t eclipse any vision for IoT that you’ve ever heard.

“The word “grid” is chosen by analogy with the electric power grid, which provides pervasive access to power and, like the computer and a small number of other advances, has had a dramatic impact on human capabilities and society. We believe that by providing pervasive, dependable, consistent and inexpensive access to advanced computational capabilities, databases, sensors, and people, computational grids will have a similar transforming effect, allowing new classes of applications to emerge.”1

The Grid, or grid computing, is the concept of having interconnected networks of computing power that scientists, companies, and even individual users can just tap into when they need it.

And over the course of less than two decades, the Grid has gone from a futuristic-sounding vision laid out by Ian Foster and Carl Kesselman to concrete implementations that play a fundamental role in the way we think about and understand computing, including spawning entire new technology markets such as cloud computing.

Here are 5 lessons the IoT should learn from the Grid.

Grid Lesson #1: Recognize that many of the technical building blocks are already available.

“The notion of linking people, computers, sensors, and data with networks is decades old…”2

Yes, the Internet of Things is in its infancy. But that doesn’t mean that everything is new.

When Foster and Kesselman first clearly articulated the Grid, there was already published research on high-performance computation, parallelization of algorithms, distributed databases, and many other “building blocks” the Grid would need. To realize the Grid, Foster and Kesselman saw that it would be necessary to educate people about the diverse research that had been happening for decades.

Similarly, many of the pieces necessary to realize the Internet of Things are nothing new: environmental sensors, wireless communications, and time series data are just a few examples of areas with decades of research already under their belts.

And just as in the infancy of the Grid, for any IoT-related challenge it’s important to remember to look back into history: the problem might have already been solved, or progress made.

For instance, when it comes to sensor data, one thing I’ve found fascinating is the resurgence of a need for expertise in digital signal processing. I’ve seen several examples of IoT-related startups reaching out to mid- or late-career experts in signal processing, and so far the anecdotal evidence indicates that this is a very good strategy.

So while it’s incredibly exciting to venture into the unknown and start a research and development project from first principles, it’s always worth checking what else has already been done and calling on experience from parallel areas of expertise.

Grid Lesson #2: Recognize that more research is still needed. And that moving it forward will pay off.

“We now see far more clearly the revolutionary impacts… This understanding has emerged from aggressive and imaginative application experiments conducted by talented research and development teams around the world.”2

One of the most interesting contributions grid computing has made to scientific research was crunching the data from CERN, leading to the discovery of the Higgs boson.

While the components needed to build the Grid were all active research areas in 1999, when Foster and Kesselman published their seminal book on the Grid, a call to action was still needed: the Grid was not going to materialize out of the ether.

Instead, research in each area and in getting the components to work together as a platform was jumpstarted by a flurry of academic and other federally-funded research.

This research provided the needed foundation for successful grid projects, like the grid at CERN.

Similarly, for the Internet of Things, there’s still plenty of work to do.

While things like signal processing, chip performance, battery design, communications standards, and internet connectivity might seem old hat, their use in the new world of billions of low-powered, connected devices is not. We need concerted efforts to understand technological needs and research possible solutions, both in academia and corporations.

It’s not a completely barren research landscape: the NSF does a reasonable job of broadly outlining areas of interest and providing some assistance for small businesses interested in working on IoT topics.

But since the IoT still isn’t well-defined or well-understood, there’s less market-driven pressure for large-scale research. We’ll only get research to the level we need through a concerted effort.

And this research will have benefits for other areas as well.

Google’s massive-scale search technologies, Amazon’s web-scale database services, and many other money-making technologies for private companies were made possible because of academic research in areas also necessary for the Grid.

With a commitment to research and experimentation, we can make sure the world of things is developed to its full potential. Technical accomplishments will cross-pollinate into parallel areas and affect sectors we didn’t initially realize would benefit from IoT research.

Making computational power a commodity is potentially orders of magnitude more economical than generating it at your desk, or even within the walls of your organization.

And whenever something becomes a commodity, you can leverage it against problems where it wasn’t cost-effective to use it before.

“Homeowners and industrialists both make use of remote billion-dollar power plants on a daily basis because the cost to them is reasonable”.1

Similarly, the most exciting use cases for the Internet of Things are use cases that were cost-prohibitive before.

For instance, IoT devices can be put in every room of a hospital or hotel to monitor sound disturbances, or around a city to monitor different types of pollution. And these networks made of up inexpensive devices pour data back into a relatively small platform, drawing on the commoditization of computing power.

Companies that take advantage of commodity economics or create new commodities are the future of the Internet of Things: they make problem-solving cost-effective.

Grid Lesson #4: Focus on the best use cases with the highest potential. They’ll all leverage interconnectivity.

“The National Technology Grid will not exist in a vacuum.”1

What really makes grid computing show off its full potential is the interconnectedness of many different computers, from locally-connected servers to home computers across the globe.

Interconnectivity isn’t just about transferring data. It’s a way for many individual computers to collaborate on a particular problem, each doing some of the computation so that together they can achieve something greater than they could individually.

And that’s why much of the discussion in 1999 wasn’t about finding ways to use the Grid to improve existing solutions. It was about solving problems that were too big, slow, or expensive to be solved any other way.

Similarly, the best use cases for the Internet of Things will be those that leverage their interconnectedness to solve problems in new and unique ways.

While something like the Nest is cool (I have one and like it), its current use as a home thermostat isn’t revolutionary: it has some interesting technological upgrades over conventional thermostats, but it’s confined to just one home.

For really revolutionary use cases, take a home with a Nest as just the starting point.

Imagine the impact on energy conservation if electric devices across an entire region could communicate and intelligently decide when to go into “eco-mode,” eliminating the need for rolling blackouts. Or if lawn sprinklers, dishwashers, and washing machines could coordinate with each other and a drought monitor to use less water or none at all.

These are just a couple of examples I came up with on the fly. The IoT’s true potential is much more immense.

Grid Lesson #5: How the Internet of Things will change our world is still very unknown.

“…we believed that Grids were destined to be important, but we would not have predicted the impact that Grid technologies have had on the practice of science and industry…”2

The Grid has been an integral part of the changing world, from perhaps the most anticipated physics discovery of our lifetime, to curing diseases through protein folding, and the search for extraterrestrial life.

The SETI@Home project number-crunches radio noise from outer space, searching for evidence of extraterrestrial life…and so far has harnessed the spare compute cycles of over 3 million home computers.

Using spare compute cycles of home computers, however, wasn’t an original scenario for grid computing. It was as unpredictable as it was clever.

Similarly, for the Internet of Things, there are sure to be plenty of "in hindsight" moments: what will be possible and even commonplace in the next 5-10 years seems futuristic or implausible now.

A smart refrigerator that knows you’re out of milk but doesn’t request a delivery because you’re on vacation is just the tip of the iceberg. Consider the potential impact that smart infrastructure could have on our lives: cars, homes, and cities communicating amongst themselves to be safer, more efficient, and provide new services we can only speculate about now.

To reap any of the benefits of the Internet of Things, we need to not lose sight of the fact that it will bring dramatic changes in the way we interact with our environment, each other, and society at large.

The IoT has the potential to make tasks more efficient, coordinated, and productive, and to make decisions better than any unassisted human could. But our vision of the IoT is too broad and fuzzy to get us to that point, and we’ll never reach it if we let the race to create the latest shiny device drive our innovation.

The Grid has a lot to teach the burgeoning IoT: Don’t assume existing research can’t help with IoT’s challenges. Invest in new research, even if the market doesn’t realize it needs it yet. Recognize the importance of commoditization. And keep the IoT’s broad social impacts at center stage, not its benefits for a single person or a company’s stock price. The Grid showed us that by being deliberate, we can use our incomplete vision of the future to achieve something concrete and be revolutionary.